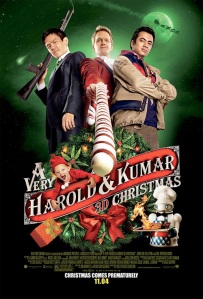 70-word review for the busy: Smart-and-stupid movies like this tend to provoke one of three reactions: 1) Laughter; 2) Groans; and 3) Earnest academic analysis of the film’s cultural meaning.
A Very Harold & Kumar 3D Christmas provokes all three, in roughly that order. As the escapades unfold, Harold and Kumar rediscover their forgotten friendship – an emotional arc that the film pulls off with surprising tenderness, and with time to spare for frozen penis jokes.

Yes, when Patton Oswalt and Kal Penn lit up just after the opening credits, I worried that I’d soon smell the three-dimensional marijuana fumes wafting towards me.

But Harold & Kumar is also a movie about renewing friendship – a sweet and well-told story about why friends drift apart, why they come back together, and what they learn from each other in the process.

We pick up 8 years after events of the last film (or 8 years and a few months, if you skipped the Guantanamo Bay sequel). Harold is now married, living in the ‘burbs, and trying desperately to impress his intense father-in-law (played by Danny Trejo), who has a murderous stare and a passion for Christmas trees. Kumar is still a stoner in a filthy apartment, sporting a three-month break-up beard. They’ve lost touch with each other, and they’re brought together only grudgingly, when a Christmas package for Harold shows up at Kumar’s apartment.

After that, it’s one misadventure after another—a car chase, a claymation drug trip, a run-in with Russian gangsters, and the requisite Neil Patrick Harris cameo. It’s good hijinks, if not high art – “high,” of course, being the operative word. But what kept me in my seat was not the crazy plotting, the tight editing, or the wit occasionally punching through the vulgarity. It was the Christmas story about two friends reuniting.

Like the movie as a whole, this scene understands not only the yin and yang of friendship – how we need friends that complement rather than exaggerate our own quirks – but also the contradictory mess of feelings that friendship can provoke.

Movies like this—gross-out comedies showing the arc of a friendship, from Superbad to Wedding Crashers to I Love You, Man—have been saddled with the cutesy name “bromance.” The implication is that these films are nothing more than cookie-cutter romances with two straight men as the leads. The name “bromance”—or even worse, “bromantic comedy”—boxes these films in with all sorts of goofy niches and soon-to-be-forgotten trends.

But that’s not quite fair, because as silly and ephemeral as the Harold & Kumar films are, it’s not a passing fad to tell stories about friendship.

Such stories don’t need to borrow the narrative conventions of romance, because they are old and resonant tales in their own right. Tom had Huck. Huck had Jim. Don Quixote only admired Dulcinea from afar; it was Sancho at his side every step of the journey. In their own crass and self-conscious way, bromances are tapping into that tradition. The genre’s awkward name derives from the way that they undercut their own sincerity with a few self-mockingly romantic moments—the cinematic version of muttering “no homo” after going in for the hug.

That’s not to say that Harold & Kumar belongs on a level with Don Quixote or the works of Mark Twain. You’d need some impressive changes in blood chemistry to make that mistake. But if you’re looking for a Christmas story about friendship, becoming an adult, and Neil Patrick Harris begging like a dog for a bag of crack cocaine, then perhaps you’ve found your film.