To be fair, the 13-year-old girls who propelled Titanic to box-office glory are now… almost 30.

Being of sound mind and body, I hereby affirm that Titanic is one of the greatest films ever made. Allow me to suggest some responses to this confession:

•“So charming! I never knew you were a squealing twelve-year-old girl.”

•“You mean… the most commercially successful movie of all time? How marvelously creative of you!”

•“Ah yes, what is it you love – the cheap theatrics? Flop-haired young Leo? Or do you just like watching things sink?”

But before you downgrade my intelligence and write me out of your will, let me explain. After holding out for 15 years, I saw Titanic for the first time last February. I expected a sweeping, corny romance – a decent date movie, if a little long.

Don’t run on the boat! Jeez. Some people.

What I saw was a profound – and profoundly depressing – movie about class. James Cameron knew what he was dealing with: a story of how the rich people not only get the fancy food, the comfy beds, and the pretty wives, but how, when the ship goes down, they get the lifeboats, too. Everything in the movie – from Kate Winslet’s cartoonishly evil fiancé to the longwinded framing device focused around an expensive jewel – goes to serve this point. The message of Titanic is stark and terrifying: We are animals. When death comes knocking, the rich will survive, and the poor will die in the ice. 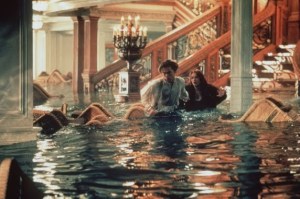 But you can’t sell tickets to a three-hour lesson in man’s brutality towards the poor. Nor should you try. You need a counterpoint, a ray of hope, a story showing how human feeling can cut against the selfish instincts of class. You need sweetness, idealism – anything that can transcend the terrible darkness of the history.

You need, in other words, a teen romance.

James Cameron is not a romance director. His earlier films – Terminator, Aliens, True Lies – were sci-fi action thrillers. I believe he wrote Titanic as he did not only to ensure its commercial success (though the film did manage to squeeze out a little profit in the end), but out of the inescapable necessity of a love story.

My expectations missed the mark in every way except one: Titanic is, no question, too long. But I’ll come back to that later. 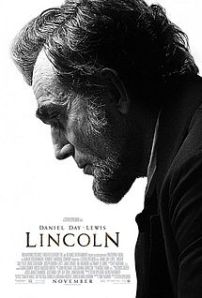 Working title: “War Horse.” But somehow that was taken.

After 2011’s weak crop, 2012 was a good year for movies. Life of Pi and Silver Linings Playbook are both better than anything that came out the year before. But my favorite movie of 2012 was Lincoln.

No knock on Argo – a fun, well-made escape flick that’s just a red-carpet walk away from winning the Oscar for Best Picture – but it doesn’t hold a candle to Lincoln.

Lincoln is almost too obvious to work. Take the world’s most acclaimed playwright (Kushner), its most accomplished film director (Spielberg), and its most talented living actor (Day-Lewis), and task them with a film about America’s greatest president, and what do you expect? How could the resulting film possibly live up to expectations?

In the film’s second scene, Lincoln proves his mettle by getting wet and not seeming to mind.

The screenplay focuses on a single legislative battle, lasting a single month. The film could easily have unraveled into aimlessness, straining towards the impossible task of covering all the bases in Lincoln’s life. Instead, it tells a triumphant story with a beginning, middle, and end. Tony Kushner apparently spent years drafting 500 pages of dialogue before settling on this timeframe, in the process throwing out 90% of what he’d already written. It was worth it: That tight focus is a masterstroke. In the closing credits, Kushner’s name is displayed as prominently as Spielberg’s, and rightly so. 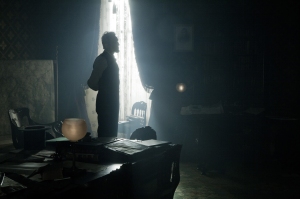 A great man. An even greater silhouette.

For his part, Spielberg deserves the Oscar he’ll win for Best Director. (It’ll be his third.) The film brims with fine historical touches. In an early scene, the president climbs down on his hands and knees to stoke the fireplace – a small but startling reminder that 1865 was a simpler time. Later, he prowls the dark White House corridors with a blanket wrapped around his shoulders. (After all, it’s January, and D.C. is cold!)

That leaves the onscreen star, Day-Lewis. But his finest moments aren’t the fist-pounding scenes you see in the trailer, or his memorable delivery of the “clothed in immense power” line. He’s at his best when employing that high, reedy voice to tell shaggy-dog stories and rambling metaphors, making his cabinet secretaries groan and roll their eyes, even as everyone else is drawn in by his wisdom and folksy charm.

Not just any wrinkles. OSCAR-NOMINATED wrinkles.

With all due credit to Tommy Lee Jones’ scene-stealing Thaddeus Stevens, Sally Fields’ compelling Mary Todd Lincoln, John Williams’ bluegrass-tinged score, and the dozen other great performances that make Lincoln work, it’s the three big stars – writer, director, and actor – that account for the film’s success. And given their creative tendencies – Spielberg’s grandness and sentimentality, Kushner’s epic ambitions and towering intellect, and Day-Lewis’s scenery-chewing virtuosity – the success of Lincoln becomes even more remarkable. Instead of an exercise in excess, it offers an improbable triumph of self-restraint.

There’s just one problem: Lincoln is, no question, too long.

Search your feelings; you know it to be true. That hat is TOO BIG.

And therein lies the link between Titanic and Lincoln, the thread connecting them to other great films from Citizen Kane to The Godfather to Lord of the Rings. 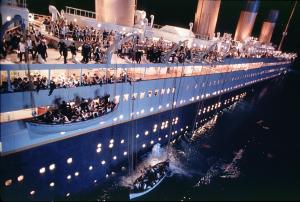 “C’mon, everybody into the lifeboat! We can all… fit…”

Titanic, meanwhile, runs about 40 minutes too long. Back down to the lower decks to rescue Leo! Wait – back up to the surface! Oh no, we’re being chased – back down into the water! Oh wait, that’s right, the ship is sinking – back up again! No individual scene feels out of place, but cumulatively, they numb and bore you. One or two sequences need to go, and it doesn’t even matter which ones.

You can see why directors like Cameron and Spielberg can’t let go of those superfluous scenes. To tackle a project as intimidating as “the Titanic movie” or “the Lincoln biopic” requires enormous confidence, even hubris – the precise opposite of self-restraint. And after spending $100 million on a scale model of the largest ship ever built, do you really expect Cameron to leave perfectly good footage on the cutting room floor, just because there’s too much of it? Or, after assembling an all-star creative team and creating the canonical film about one of the greatest leaders in Western history, do you expect Spielberg to resist depicting his assassination, simply because it’s not strictly necessary? 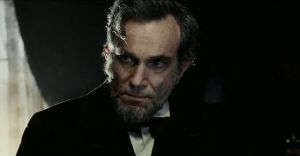 An off-the-set shot of Daniel Day Lewis hearing about possible cuts to the film. I assume.

The excesses of these movies are inseparable from their virtues. If you want epic, you’ve got to accept some extra. (Even the Iliad has that interminable catalogue of ships.)

Contrast this with a film like the adorable Silver Linings Playbook, or the precious Moonrise Kingdom. Small movies like this can afford to be perfect, just as it’s easier to build a flawless building than a flawless city. The larger the undertaking, the greater the risks, and the more numerous the pitfalls. Even a film as focused as Lincoln can’t resist the victory lap.

2 thoughts on “Lincoln, Titanic, and Why Great Movies Run Too Long”